has been developed by CyberGhost S.A. since 2004. The company is headquartered in Romania and has been part of the Kape group since 2017. The server network of CyberGhost has been continually expanded since the software was first published. Now, the company operates 3950 VPN servers at 60 locations all over the world.

With CyberGhost, it is possible to stream films and series over the Internet without interruptions or restrictions. The VPN software works with all streaming providers such as Amazon Prime Video or Netflix. CyberGhost users can watch live broadcasts with the VPN client, streamed over, e.g., Sky Go or Fox Sports, in each country and without waiting. CyberGhost users can download files from the Internet anonymously and quickly thanks to the high transfer rates and a secure encryption. The VPN client works with all common file sharing platforms such as uTorrent and BitTorrent. Each user is assigned a secure and non-traceable IP address. With this, CyberGhost customers can circumvent censorship and blocks and can freely use the Internet in countries such as China, Turkey, and Russia as they could in the US.

Customers can find answers to all important questions in the help and FAQ section on the CyberGhost website. Alternatively, users can easily contact customer support 24 hours a day and at all times via email. Undecided users can test the CyberGhost software for 45 days at no risk or cost.

Films and series are usually available on streaming platforms before they are broadcast on television. Combine this with the large selection, no ads, and better quality, and it explains why more and more households are using streaming platforms such as Amazon Prime Video, or Netflix. Unfortunately, new films and seasons of series are not available in all countries at the same time. Users who are not located in the countries of production need to be patient for a long time before they can access this content in their countries due to slow synchronization or licensing issues. Live broadcasts of sports events, such as NBA, NHL, or NFL games, are directly available to users in the US.

People who like to access the newest films, series, or sports broadcasts right away simply use a VPN software. A VPN client assigns an anonymous IP address to each user, changing their virtual location. This makes it impossible for streaming providers to determine in which country users are really located. Users can virtually “move” to the production countries and receive full access to all desired content. This easy and effective principle functions for all live sports broadcasts as well. This allows VPN users from all over the world to watch games of the NHL, NBA, and NFL live over the Internet.

The VPN provider CyberGhost operates 3950 high-performance servers at 60 locations all over the world such as in Spain, Germany, France, the US, Japan, and Italy. This offers users over 3,200 free IP addresses. With maximum download speeds of 98 Mbit per second, 4K content can be streamed effortlessly and without hampering. The fee-based versions of CyberGhost offer unlimited data volume, which is definitely recommended for streaming. Users with mobile Android or iOS devices can use the mobile app to stream their favorite films and series wherever and whenever they want.

These days, users can download vast amounts of content from the Internet and store it on their computer thanks to high bandwidth and massive hard drives. The fastest downloads are offered through the well-known file sharing platforms such as uTorrent, eMule, or eDonkey. Unfortunately, a lot of users share illegal content that infracts on copyrights over the beloved exchange platforms as well. Authorities can obtain all necessary information on the file sharing users’ activities via their IP addresses. People who download or share illegal content, such as films, series, or music, can count on a hefty fine and severer punishments.

Instead of downloading files directly from the Internet without protection, file sharing users can alternatively use a VPN client. The software masks users’ IP addresses, and their activities are virtually unrecognizable to the outside world thanks to a secure encryption. The encrypted IP address makes it virtually impossible to trace activities. Most VPN software additionally has a kill switch function. This function shuts down the file sharing software in case the VPN connection is interrupted. Many VPN providers operate their own DNS servers, ensuring that third parties cannot access user data.

CyberGhost stands out with its high speed. In practice, download speeds of up to 98 Mbit per second and upload rates of max 87 Mbit per second are reached. Users benefit from the automatic emergency shut down via kill switch, automatic server change, and DNS and IPV6 leak protection. In accordance with its own log-free policy, the VPN provider only stores a minimum of login information. User activity is neither logged nor stored. The usage of P2P networks is allowed.

The Internet connects people and intrinsically represents freedom of expression and boundless opportunity. This is the case in many countries such as the US and Germany. However, there are exceptions: countries such as China, Russia, or Turkey. The governments of these countries unfortunately use their technological capabilities to censor the Internet and block various websites and services. This makes it impossible for users in these countries to access well-known websites such as Facebook, Twitter, Wikipedia, or YouTube. There are also firewall blocks for companies and public institutions.

A VPN client encrypts the data connections of its users and masks the IP address. All data communication takes place through a secure tunnel when using VPN software. This makes it impossible for authorities or companies to get wind of the IP addresses and files of the VPN users. The firewalls in the aforementioned countries therefore do not recognize the VPN users’ connections as unwanted. This makes it possible to use the Internet without restrictions or censorship.

The VPN provider CyberGhost operates a total of 3950 servers at 60 locations all over the world. CyberGhost customers dispose of over 3,200 IP addresses thanks to this huge selection of VPN servers. The worldwide server network has excellent performance compared to other providers and is very well designed. The strong 256-bit AES encryption offers CyberGhost users ease of mind – they do not need to worry about the safety of their data and can surf the Internet without restrictions or censorship. The CyberGhost app allows users to always securely browse public networks with their mobile devices as well.

Users are exposed to a host of risks on the Internet. Viruses, worms, and trojans are no longer the only risks nowadays. Hackers, Internet criminals, and even companies present serious risks as well. The personal Internet user data are of great value to all these parties. Internet criminals attempt to access online banking data, while large corporations gather personal data for advertising purposes and resell these. Dangers loom in public as well as all private networks.

The security of a connection significantly increases when users do not access the Internet directly but through a VPN software. A secure encryption completely masks the actual IP address. All sent and received data are encrypted so that they are unrecognizable. Thanks to these effective measures, users surf the Internet anonymously when they use a VPN software. As such, criminals, authorities, and companies cannot access valuable data and misuse these for their own ends.

CyberGhost VPN software uses a strong AES encryption with 256 bit. This ensures the necessary security when surfing and protects the VPN user’s data and activity. The kill switch makes sure that all pre-determined programs are shut down immediately in case of a connection loss to the VPN. CyberGhost users benefit from automatic server change as well as DNS and IPV6 leak protection. CyberGhost supports a host of different data transmission protocols. These are listed in the following table.

As regards user anonymity, the Rumanian VPN provider only stores the login data of its customers and does not store user activity data. CyberGhost additionally operates its own DNS servers, ensuring that third parties or authorities cannot access user data. The VPN subscription can be paid for anonymously via gift cards or Bitcoin payments. All security features are summarized in the following table.

The CyberGhost VPN network – built up over many years – consists of more than 3950 servers at 60 locations around the world. Each user can always find a free and fitting IP address from the more than 3,200 addresses. The maximum download rate of 98 Mbit/s is above average, making the provider well suited for streaming 4K content as well. The maximum upload speed of 87 Mbit per second is equally convincing.

CyberGhost wins its users over with its short time to connect of just 6 seconds and a very good ping time of 4 milliseconds. This makes the VPN client excellently suited for online gamers. The software generally stands out with its high stability and reliability. CyberGhost customers enjoy the automatic server change function and unlimited data volume. In the following table, all performance information is listed.

CyberGhost’s VPN software wins its users over with its very easy installation. The client can be installed within a few minutes on computers running on Windows or Macintosh. The software needs to be manually configured on Linux computers. Mobile devices with an iOS or Android operating system can use the official app, which can be operated just as easy as the computer software thanks to its clear and user-friendly design. All information regarding device compatibility can be found in Table 4.

The CyberGhost website contains an extensive FAQ and help section. Users only need to enter their question and will receive a fitting answer within moments. With further questions or if any problems arise, customers can directly contact customer support at all times via email. The support is competent and quick.

The VPN software CyberGhost has been in existence since 2004; customers therefore benefit from an experienced provider with a worldwide server network. The selection of 3950 VPN servers at 60 locations and over 3,200 IP addresses more than suffices. The download (98 Mb/s) as well as the upload speeds (87 Mb/s) are convincing. Users benefit from a secure encryption and practical kill switch function. They additionally benefit from automatic server change functions as well as DNS and IPV6 leak protection. No user activity data are logged in accordance to the company’s own log policy.

The unlimited bandwidth and low ping makes the CyberGhost VPN client excellently suited for file sharers and online gamers. Streaming users will also find that CyberGhost meets all their needs thanks to the quick download rates. Aside from the common payment options, the software can be paid for anonymously per Coint Payment or gift card. CyberGhost’s customer support, available at all times via email, is friendly and competent. Interested users can try out the VPN software for 45 days without risk and get their money back if they are not satisfied.

Thank you very much!

Thank you for your review! 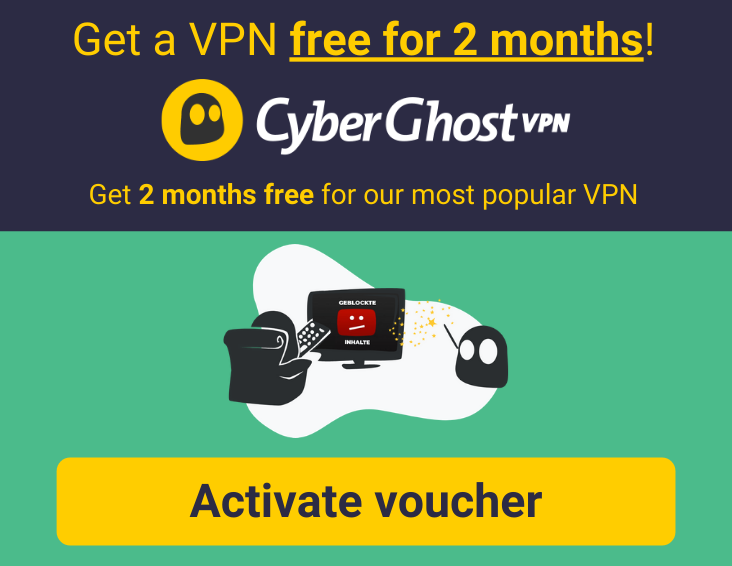